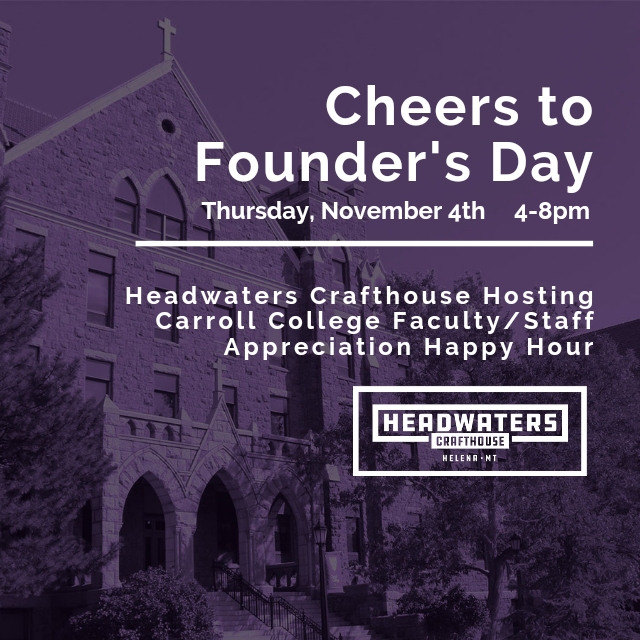 Celebrate Founder's Day with a special Carroll College Faculty and Staff appreciation Happy Hour at Headwaters Crafthouse on Thursday November 4, 2021 from 4-8pm. Simply show your Carroll ID to receive a discount on all beverages. Let's gather, relax, and share a drink with one another! 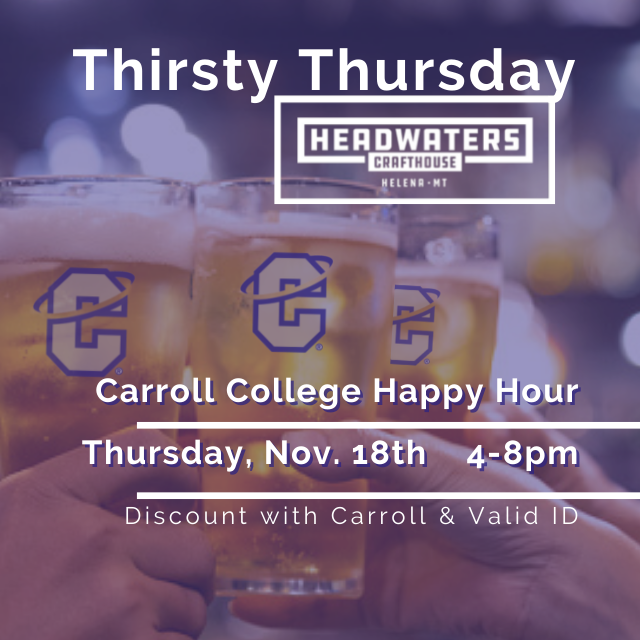 Carroll College Happy Hour at Headwaters Crafthouse on Thursday November 18th from 4-8pm. Simply show your Carroll ID and ID to receive a discount on all beverages. It's Thusday, come gather, relax, and share a drink with one another!
www.headwaterscrafthouse.com
HEADWATERS CRAFTHOUSE
2125 N. LAST CHANCE GULCH

SAFETY:
COVID: Please know that the Farmer's State Bank Building layout/design, air circulation and filtration was all designed with COVID in mind as a virus that may be with us for a while. There is room for social distancing, all windows for natural UV light to enter the building, & state of the art fresh air and filtration circulation system. There is also a patio!

BUZZING: Headwaters has one time use breathalyzer for purchase.

HOMEWARD: Headwaters can easily call you an UBER to get you HOME and SAFE. 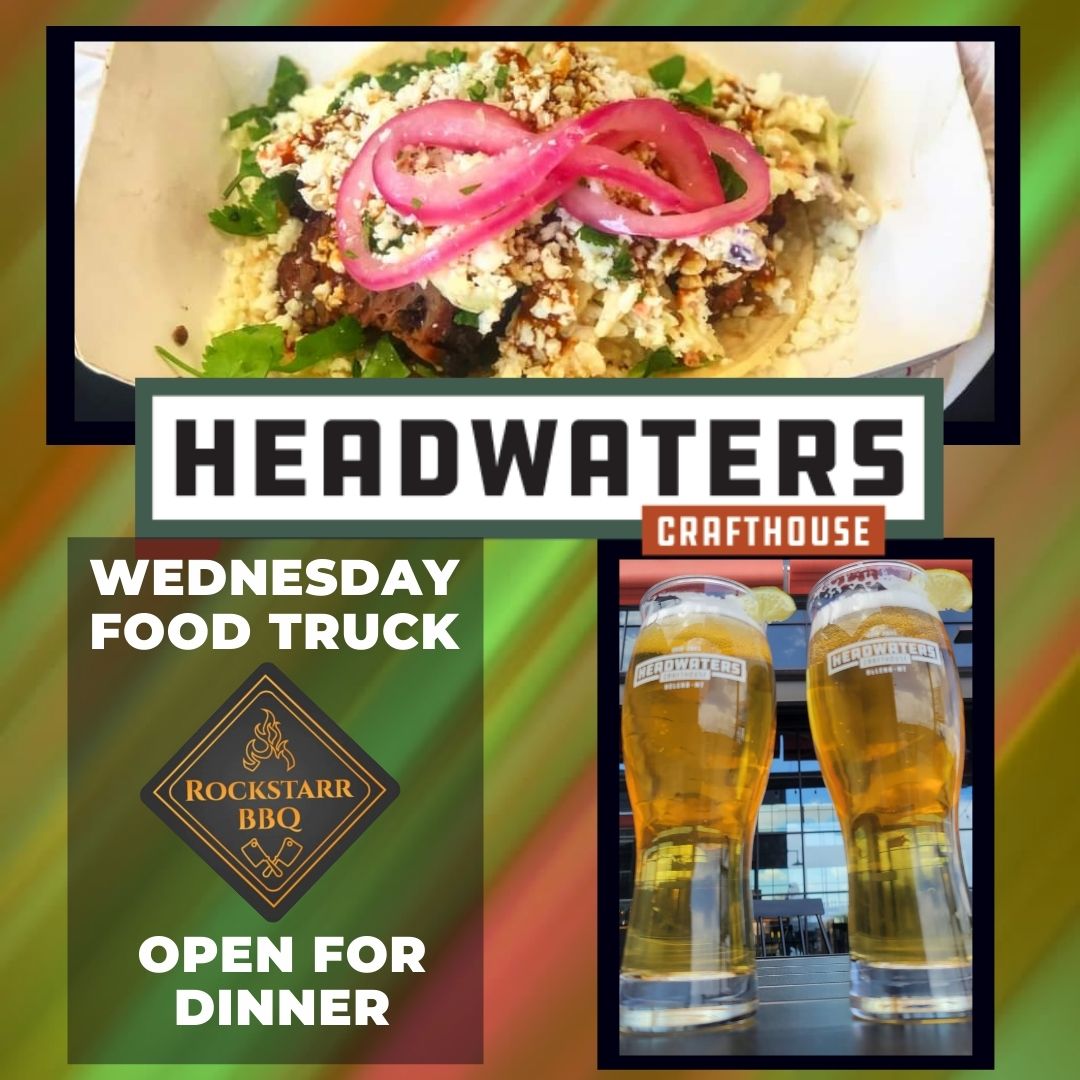 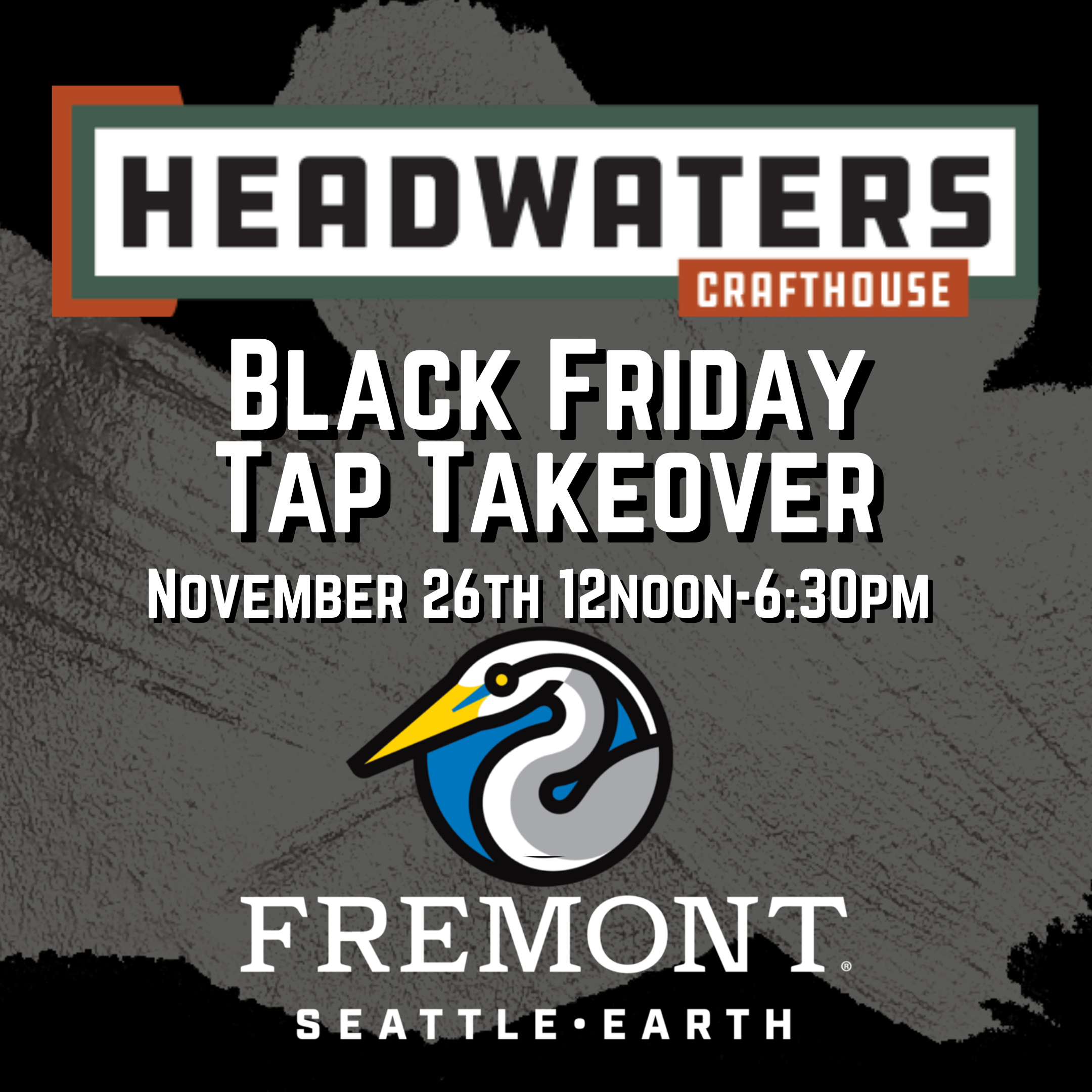 BOURBON BARREL-AGED DARK STAR (BBADS)
ABV: 12.7% IBU: 50
Formerly known as Kentucky Dark Star (KDS)
Imperial Oatmeal Stout Aged in Bourbon Barrels. This year’s release is a blend of 24, 18, 12, and 8-month Bourbon Barrel-Aged Dark Star in 7-12-year old Kentucky bourbon barrels. The roasted and chocolate malts complement the smooth oats to bring you a stout delight wrapped in the gentle embrace of bourbon barrel-aged warmth. A touch of sweetness dances in balance with the hops to finish with a wave, and then she’s gone.
https://untappd.com/b/fremont-brewing-bourbon-barrel-aged-dark-star-2021/4531137

WINTER ALE
IMPERIAL WINTER ALE
ABV: 8% IBU: 45
Winter Ale is an Imperial Winter Ale to snuggle up to, released for the fall and winter months when snow blankets the terrain of the mind and the body craves warmth and, let’s be honest, it’s dark and wet most of the time so your beer better be damn good. Winter Ale is dark like the evening weather with roast chocolate and warm malt flavors balanced by brown sugar, coffee, and graham cracker aromas. Warm up to it.
https://untappd.com/b/fremont-brewing-winter-ale-2021/4582438

HEAD FULL OF DYNOMITE V.33
HAZY INDIA PALE ALE
ABV: 6.8% IBU: A Crap Ton
Head Full of Dynomite (HFOD) is an ongoing series of hazy IPAs, each one different from the one before. “Friends bring happiness into your life, best friends bring beer.” – VWP
Mildly sweet, and bitter with moderate lingering sweetness in medium body that warms slightly
https://untappd.com/b/fremont-brewing-head-full-of-dynomite-v33-2021/4594226

MILO INDIA PALE ALE
ABV: 7% IBU: 80
This Rotating IPA Series is named after and in honor of the pets of Fremont. “Love is a four-legged word.” Pineapple and papaya tropical notes with grapefruit, orange, melon, and pine. Grassy, sweet aromatics and florals are also present. Flavor: Gently sweet, moderate bitter, which lingers, and moderate lingering sweetness in medium body
https://untappd.com/b/fremont-brewing-milo/4478952 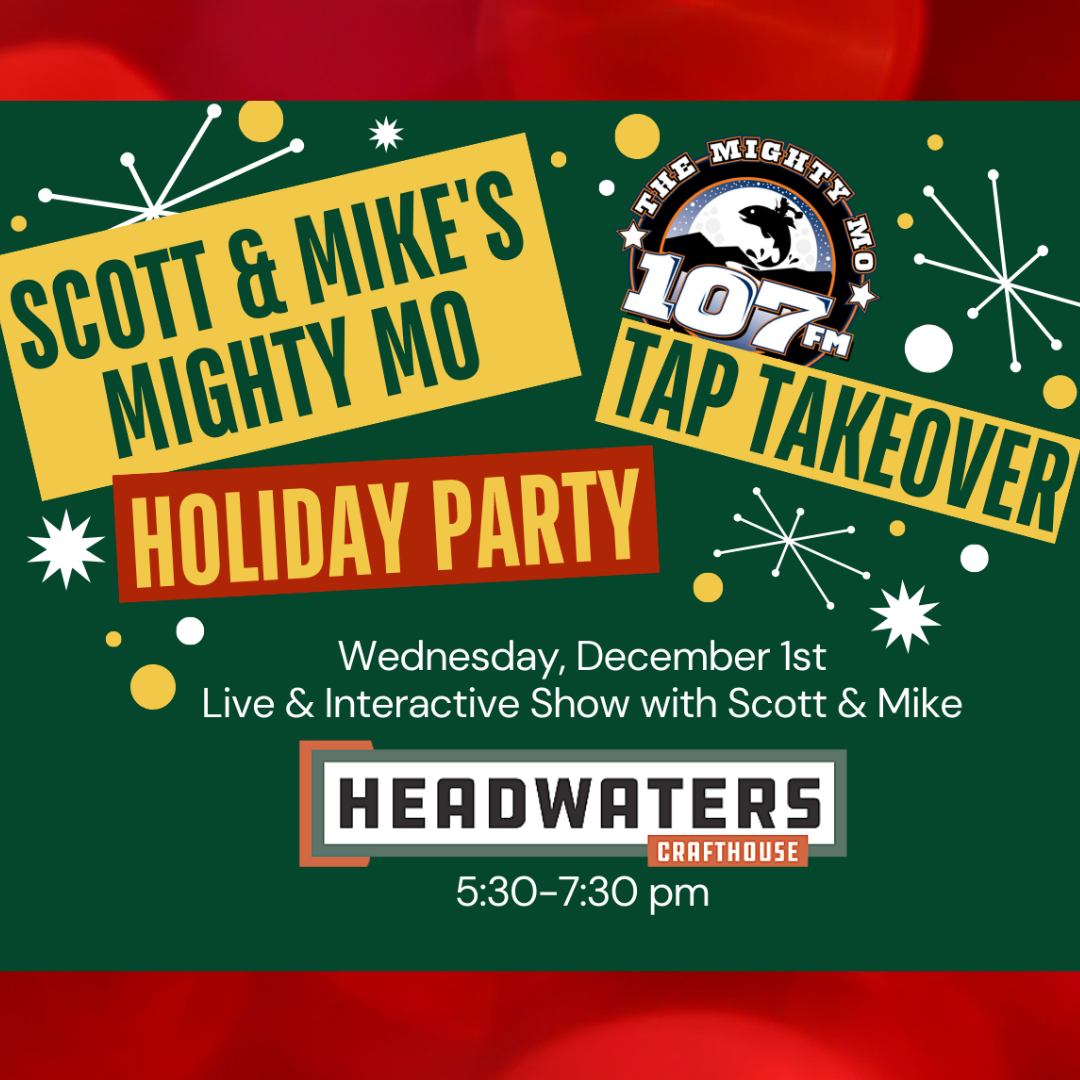 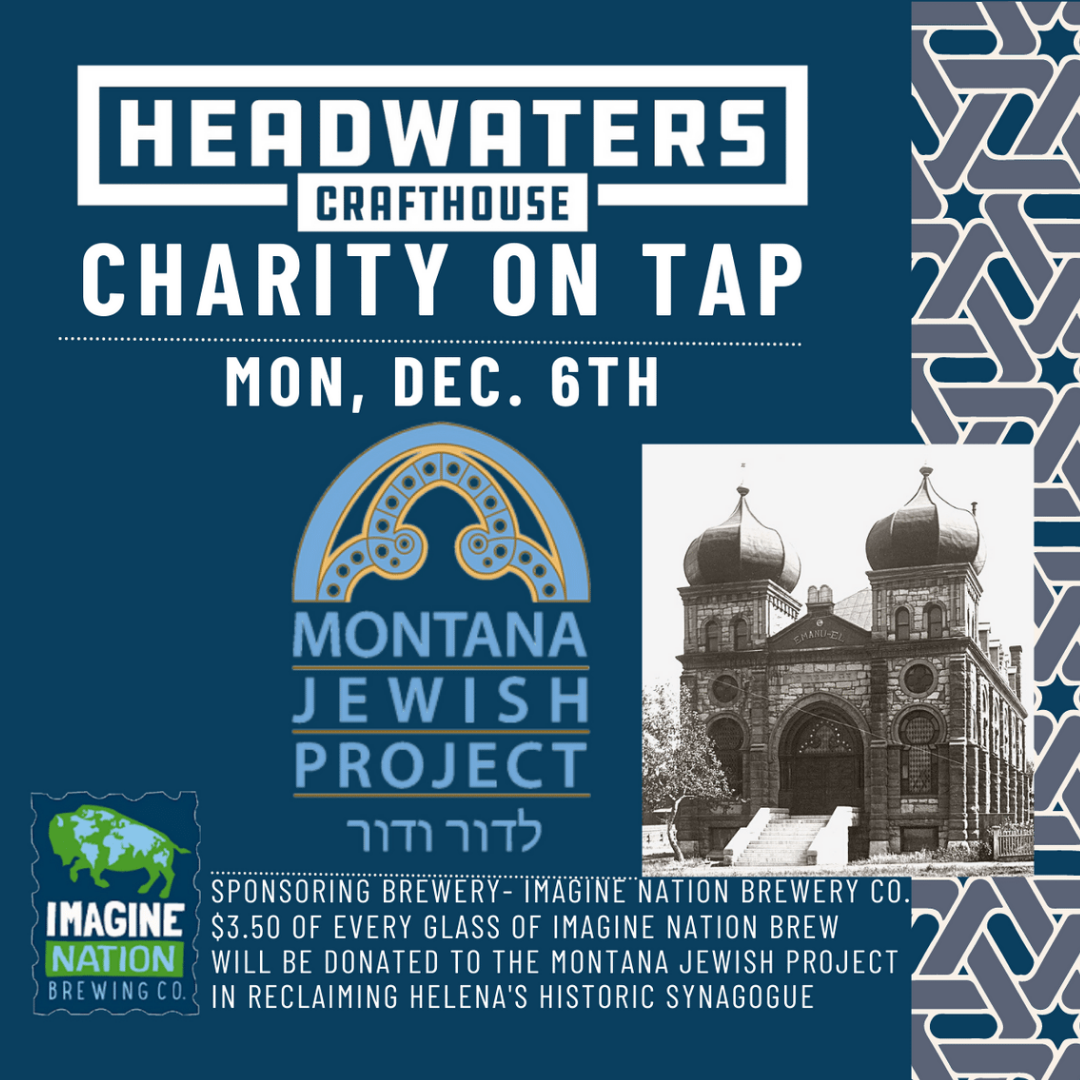 Headwaters Crafthouse Charity On Tap
Hosting The Montana Jewish Project
Monday, December 6th 5-8pm
Come Meet the Board Members & the Fundraising Efforts in Reclaiming Helena's Historic Synagogue.
With the Generous Colaboration of Imagine Nation Brewering Co. as the Brewery Sponsor;
Every Glass of Imagine Nation Brew Purchase, $3.50 will be Donated to the Efforts of Purchasing the Historic Synagogue.

Pink Patties Food Truck will be setup serving for the event. 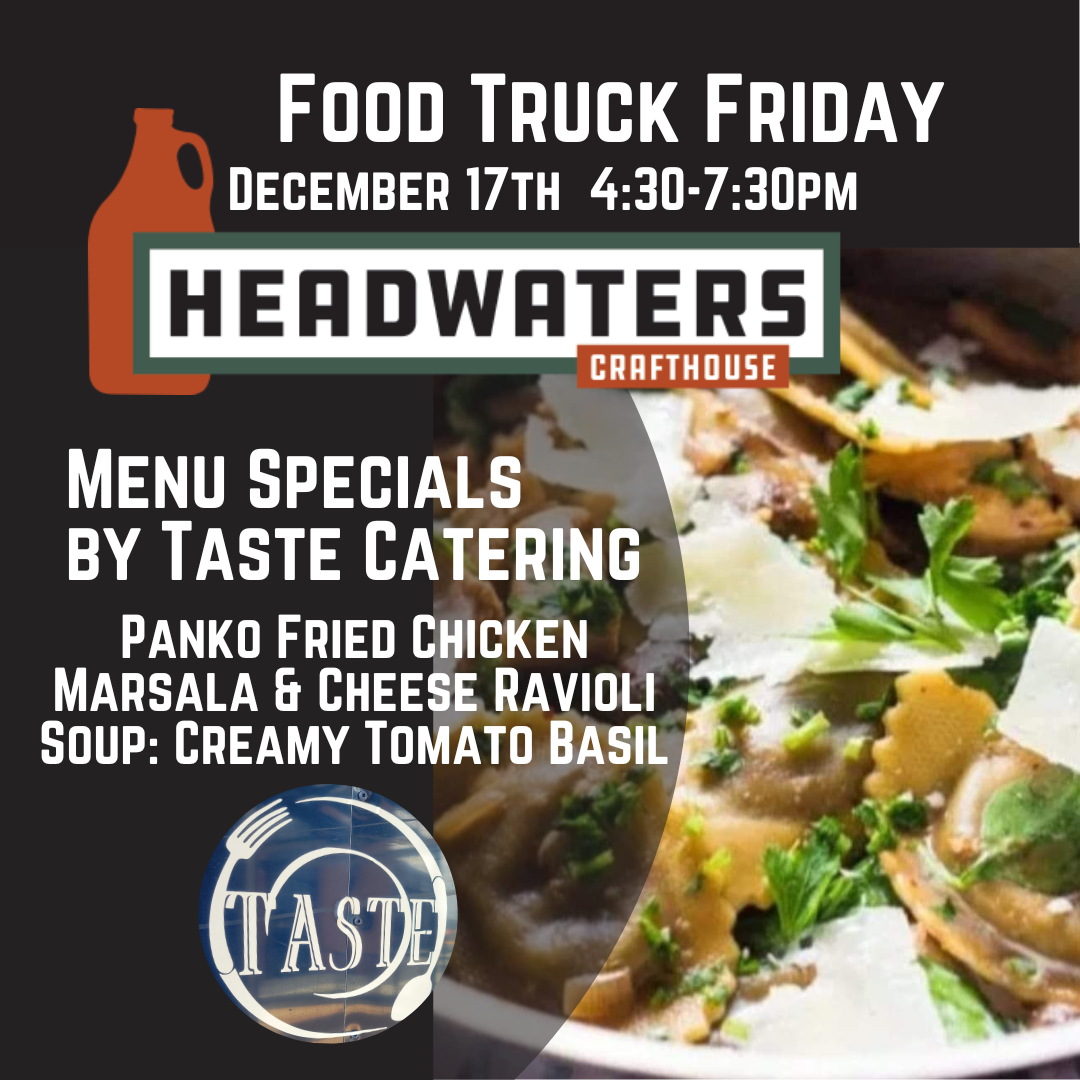 YOU CAN PRE ORDER BY MESSAGE OR CALL TASTE CATERING @ 437-2365
Tap List: www.headwaterscrafthouse.com 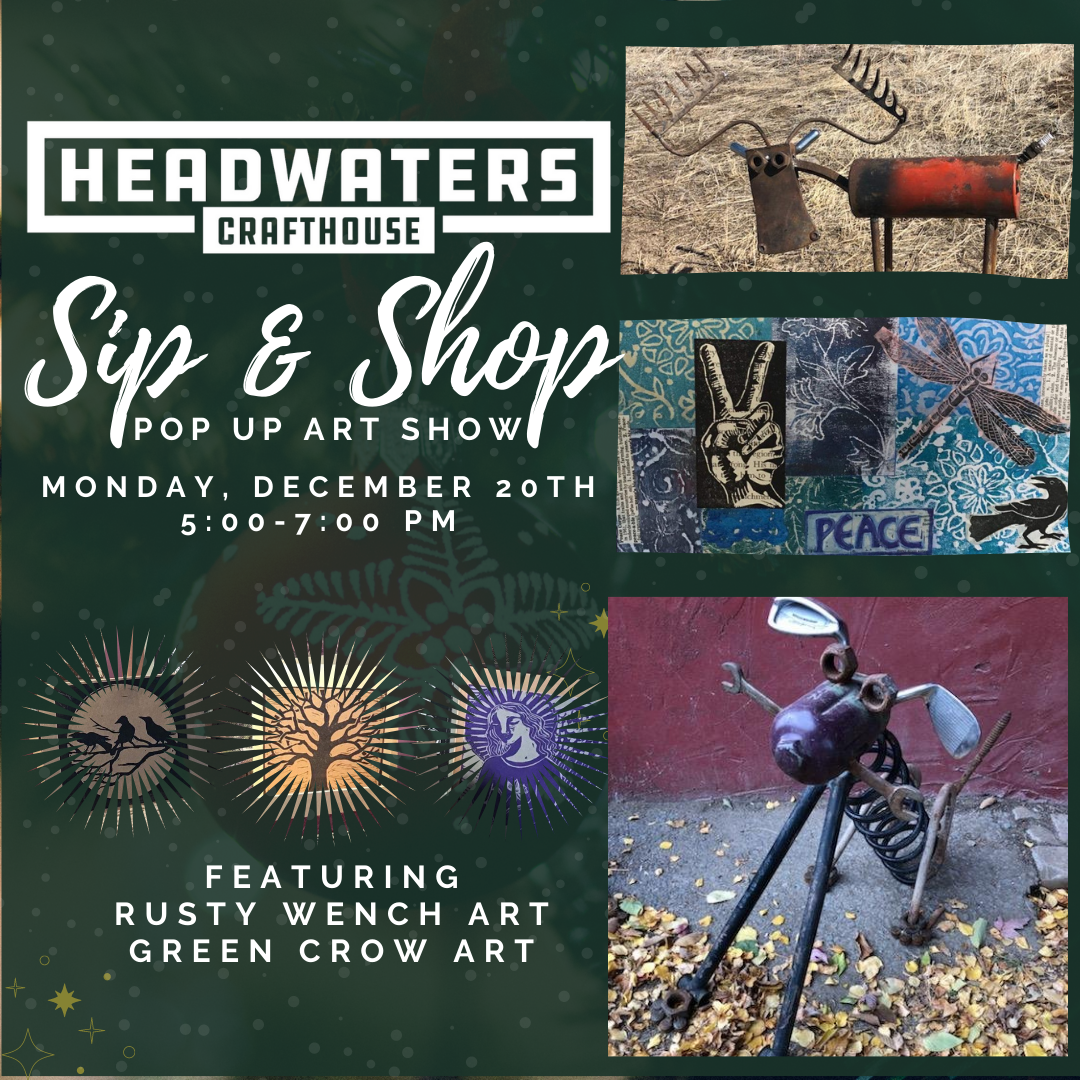 Lots of fun categories this year! Go give them a vote ☑️ 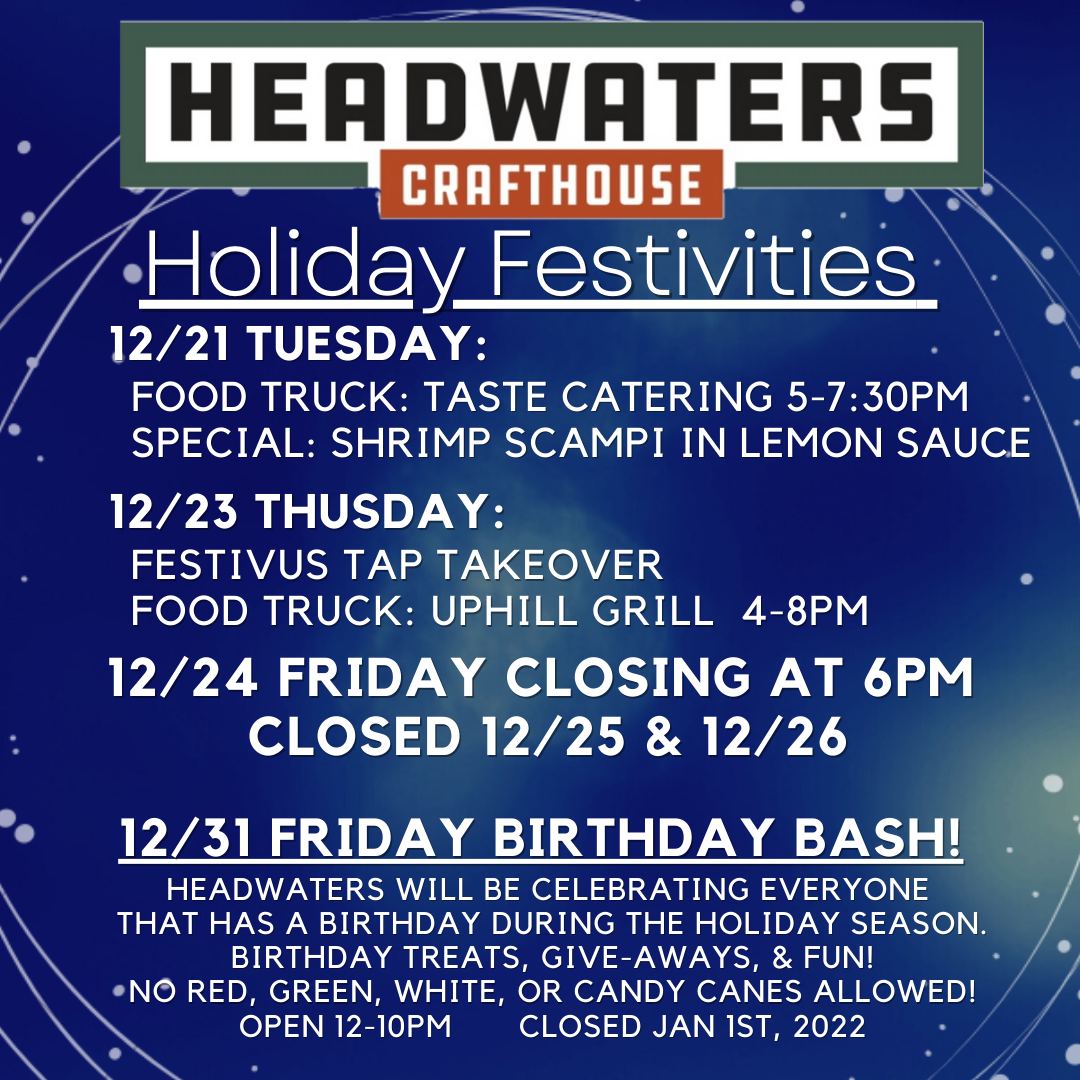 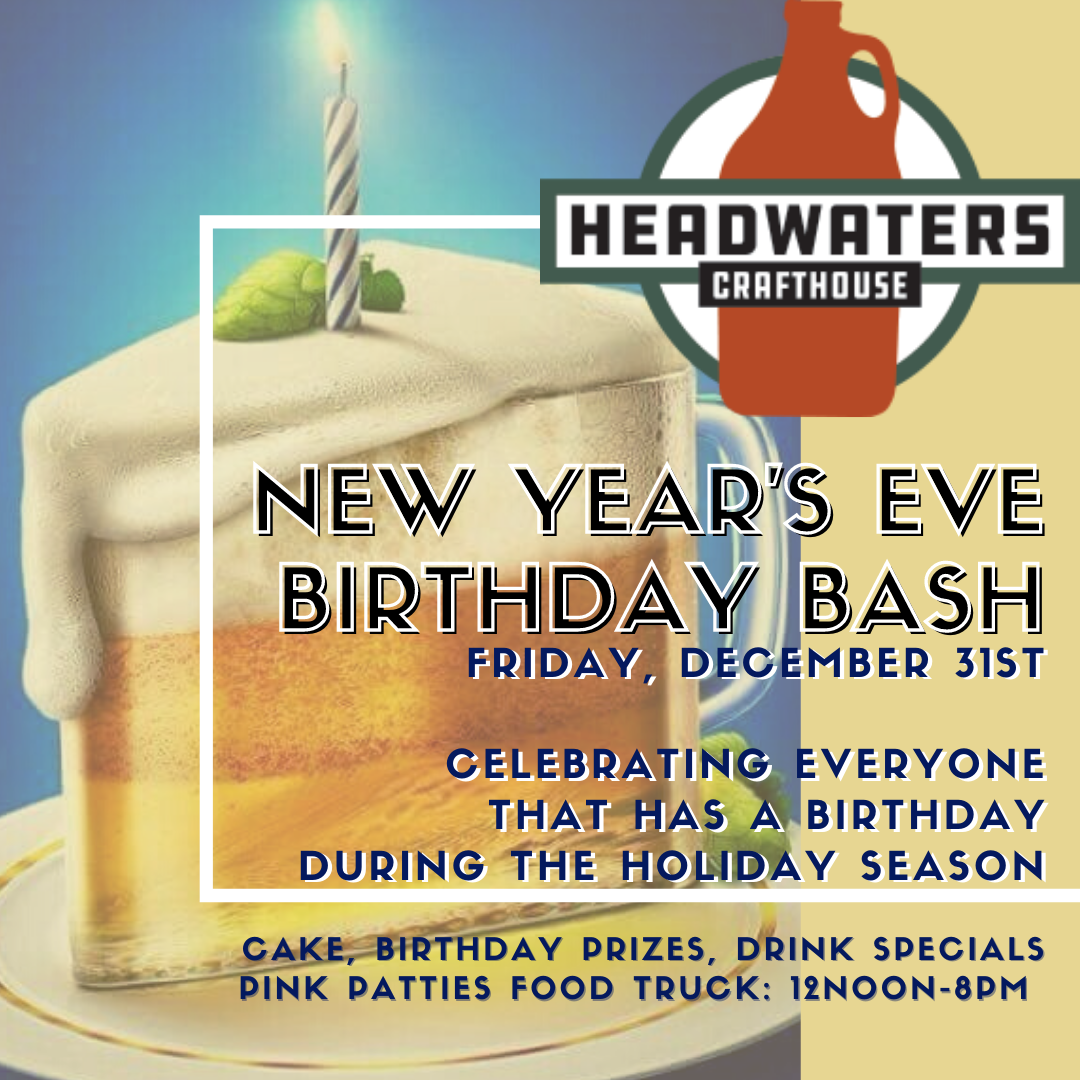 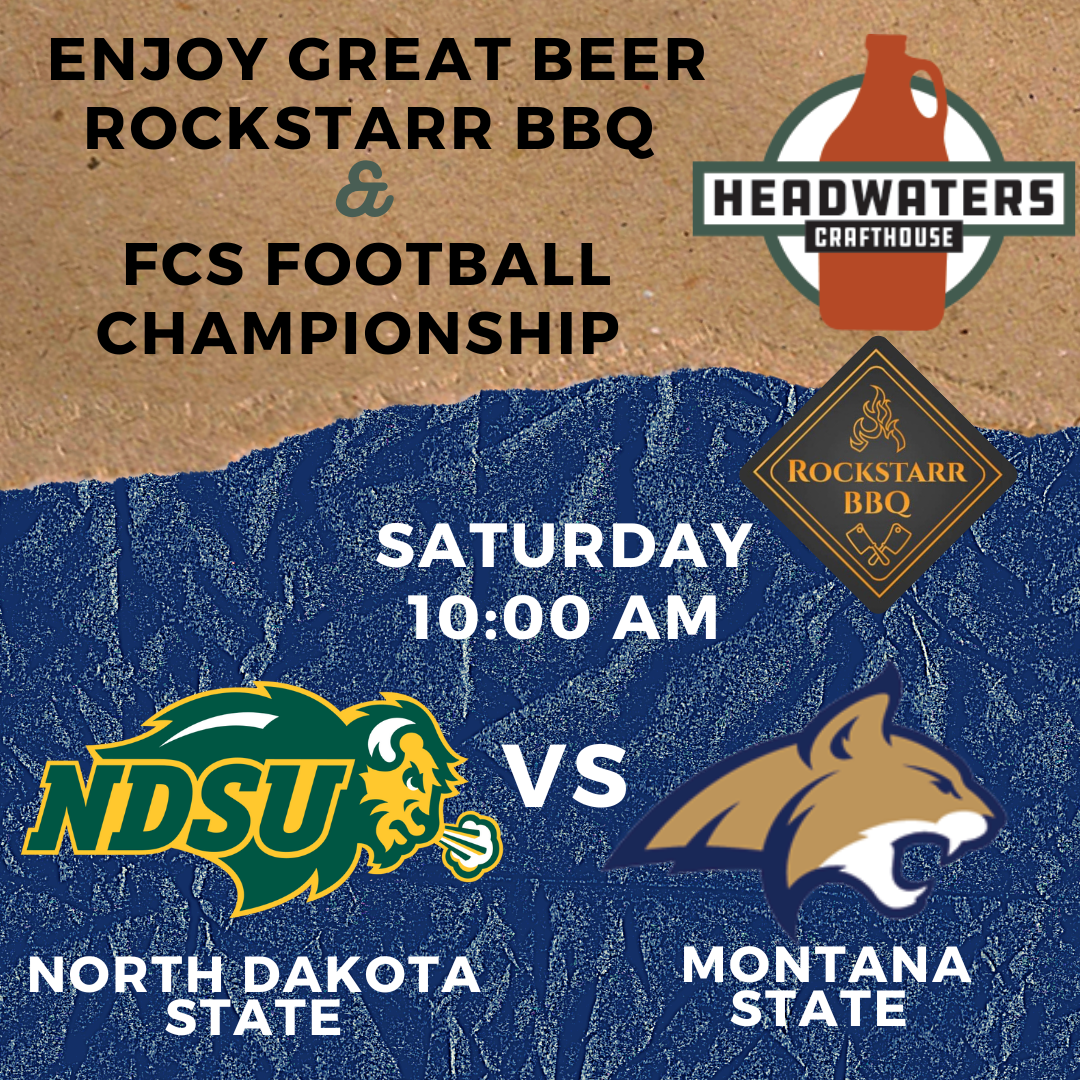 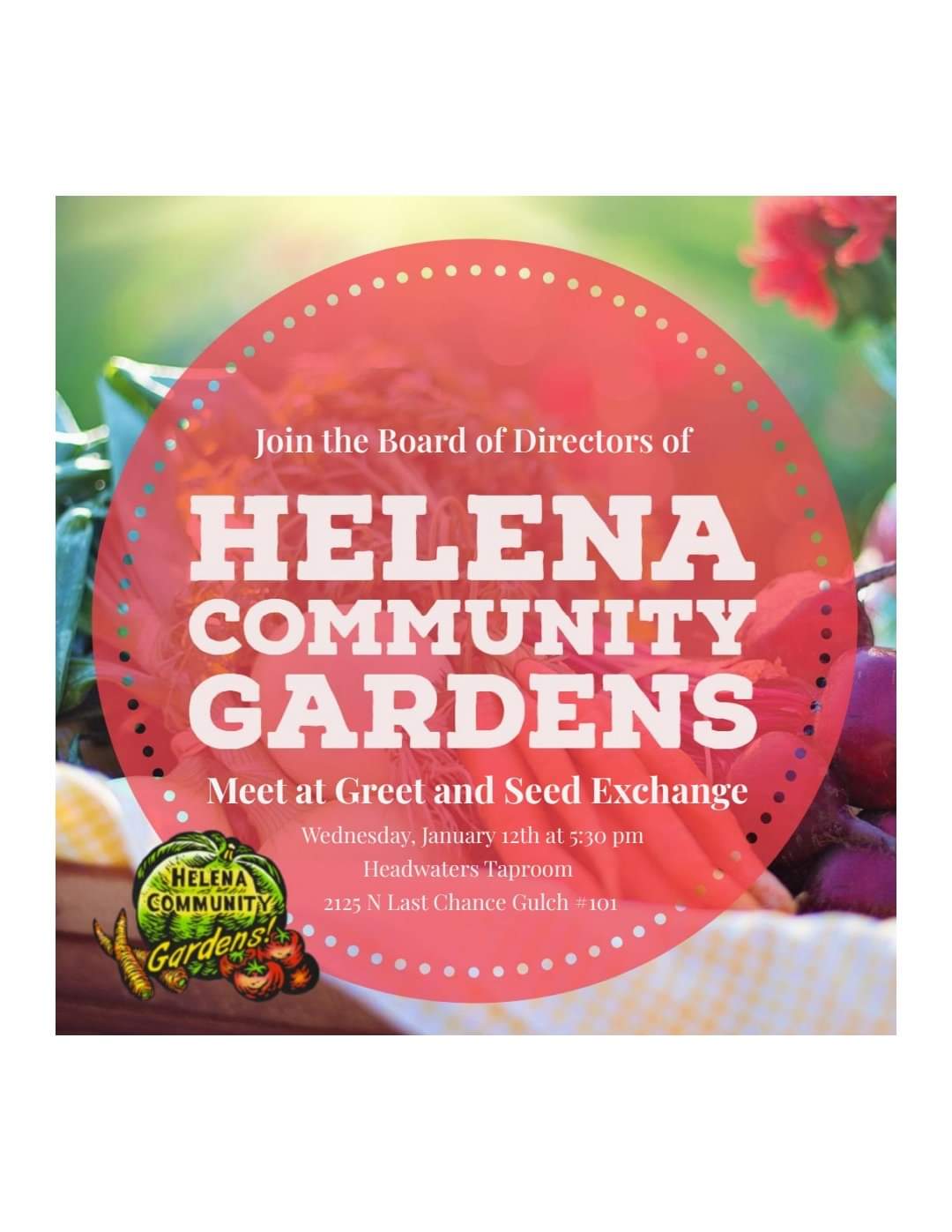 Helena Community Gardens Seed Exchange. Grab a pint with the Gardeners next Wednesday (1/12) 5:30 at Headwaters Taproom

This error message is only visible to WordPress admins